I’m pretty much convinced that everyone has an Elvis story. I came to realize that as I researched and wrote my book, Waking Up in Graceland, An Elvis Story. Now, as people buy the book, they tell me their stories. Here is a start on sharing those with you: 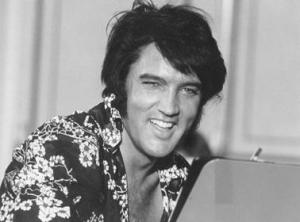 “When I was growing up in England, I was never allowed to listen to any music other than classical unless my mother was out of the house or in a room furthest from the kitchen with the door closed. When I was at home from boarding school and she had gone shopping, I would put my Elvis tapes on and have the bass and volume turned up as loud as possible. (We lived  several yards up a hill from the road and I am sure all the houses around us – and they weren’t really close – and anyone walking on the pavement could near every word.) One day, I got my mother to listen to one of Elvis’ religious, slow songs and asked her what she thought of his voice. She said it was good and when I told her that it was Elvis, she was amazed!”

“Elvis was planning to come to Terre Haute, Indiana as part of his 1976 tour. We lived in a small town outside of Terre Haute, so were very excited that he was coming so close instead of one of the larger venues in Indianapolis. It was November 1975 and an extremely cold Indiana day when the tickets went on sale. My mother never let us go outside once the temperature hit 65 degrees without bundling up, so much to my surprise, she took us with her to get tickets that day. We stood in line outside in the freezing temperatures for about 3 hours, waiting to buy tickets. Although we were bundled up, we were chilled to the bone yet it didn’t matter. I was 11 years old and still remember the excitement in the air and how people all around us were sharing their stories about Elvis – their favorite movies, sonsg, how handsome he was, etc.

I feel so lucky to have seen him in person and it was an awesome concert/show! What was most fascinating that day we bought the tickets was the realization that my mom wasn’t just a mom, but was a girl like all the others standing there wanting to get tickets. I had never thought about it before, but she was a teenager when Elvis started taking the country by storm so she probably had a big crush on him. It’s such a fond memory, not just because my siblings and I get to tease her about making us freeze to death that day, but because I saw my mom in a different light and it’s a wonderful feeling to realize your mom actually had a life before you were born and I got to get my first glimpse of that on that day.”